I got a GoPro!
Snorkel Video
Posted by A Merchant Mariner at 7:03 PM 2 comments:

I Shake My Fist

The adjectives to describe the way this ship handles the sea are numerous, but none of them are flattering.

Right now we are pounding into the waves.  Technically, we are “quartering” them, meaning approaching them at about 45 degrees to effectively increase the period of the swells, thereby reducing the pounding on the ship… instead, we are pounding through them like a hammer with an added bit of a roll.

Each time we ram into a swell, shock-waves run back and forth the length of the ship.  It forces a sailor to walk with legs wide, taking short, uncertain steps, because while the shockwave interval is known, the next swell on the bow is not; it hits randomly.  It could be the next swell, or the next 5 in a row.

The swells aren’t in time with the shockwaves running up and down the ship.  The roll is similarly unpredictable. The whole motion is simply damnable and wearying.

So we are forced to walk like fat, drunken penguins; every few minutes or so, one of these random swells punches the ship’s nose and we get thrown into the nearest protrusion, and because this is a steel ship, that means the protrusion is steel.  I am covered with bruises and sore spots.

I call it “the shaken baby” syndrome.

One particularly bad strike picked up my mug and shattered it on the deck.  Nothing else on the ship was damaged. Only the obliteration of my mug marked the passing of a rogue that seemingly gave my coffee addiction the middle finger, and nothing more.

Other times we’ll roll and every immovable object makes a break for it and starts across the deck and the sound of falling brooms, sliding cases of water, toilet lids falling, and other bedeviled objects animated to do harm or mischeif fills the ship.

I lay in my bunk, unable to sleep, and shake my fist at the sea, but the sea doesn’t care- it just shakes me back.

Posted by A Merchant Mariner at 6:58 PM No comments:

We're steaming into Majuro today at 1430.  7 days of ever increasing swells and up to 30 degree rolls... Sleep has been elusive and I am pretty tired. 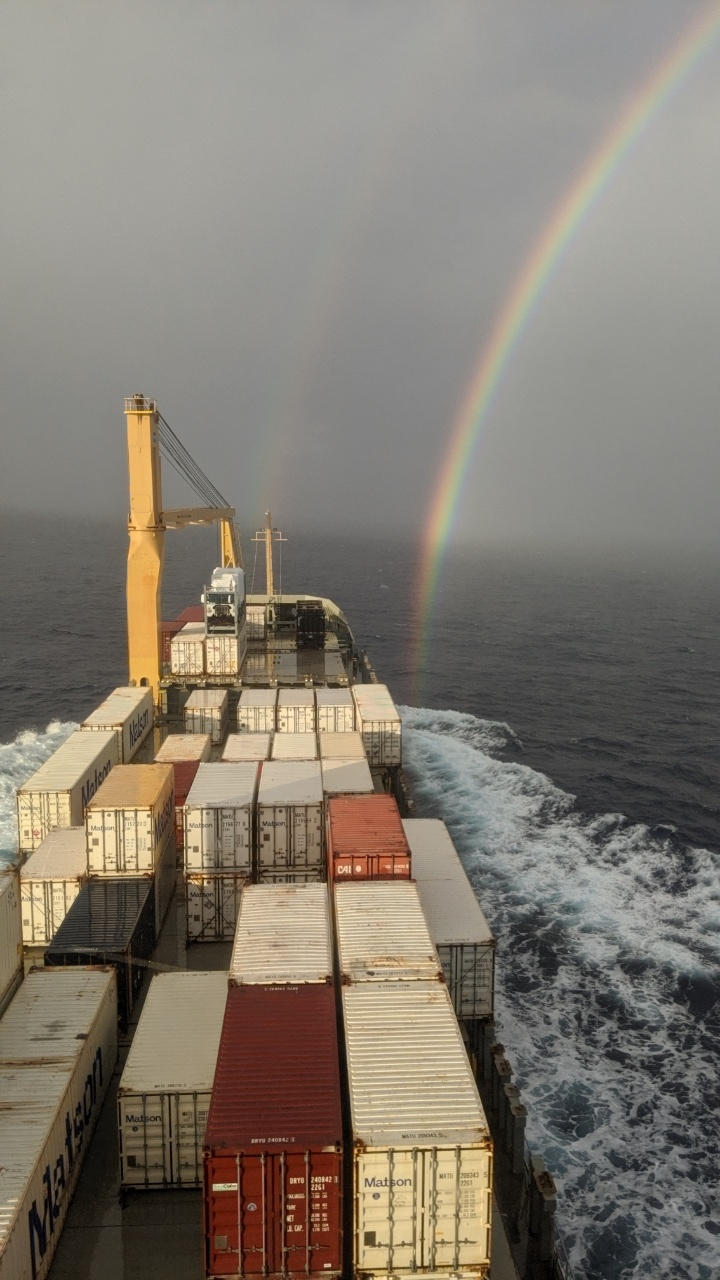 Rumor is the ship will be laid up after next voyage until the company can figure out a better place for her.  The rumor is also that we'll be going to Australia. And that we won't.

I was telling the second mate a story a shipmate told me once as his explanation of why he quit drinking, when the chief mate exclaimed "Hey! That was my first ship!" both corroborating the story, and giving me further details.

I'll call the former shipmate George.  I wrote about him before in great detail, probably back in 2013- but not this story (there was so much else to tell this slipped by the wayside).

George was a relief bosun on a ship at anchor.

According to George, he had been out drinking and was so drunk that he'd somehow, um... for lack of a delicate way to put it, "defecated himself."

When he tried to get on the launch to go back to the ship, the launch driver refused him.  A vocal argument ensued, and soon the police were called to the scene.

When George's executive officer showed up to take the launch back to the ship, he stumbled upon the altercation and intervened, telling the police that he'd take George to a hotel, get him cleaned up, and get him back to the ship the next day.

The police, relieved at not having to arrest a belligerent drunk man covered in his own filth, or have him inside their police car, found this arrangement quite satisfactory, so off to a hotel George and his executive officer went.

George was on the first launch back to the ship the next morning.  He was wearing work boots, a sheet wrapped around him as a toga, and a backpack.  Standing next to him was the shipping companies auditor.

As the launch came alongside the ship, George hiked his toga up and flashed the crew - one and all - including my current chief mate, who was standing on the deck of what was then his first ship; he had been sent to the gangway to escort the company auditor to the captain's office.

The part of the story that best describes the entirety of the maritime industry, however, is that it doesn't end with the sentence "And then he was fired."

Speaking of characters... I'm trying to engineer getting Peter, the guy whose tourettes syndrome catch-phrase is "Hooters! Oink! Oink!" on this ship as an AB.  I've stressed to him how he should try for the 4x8 watch - the chief mate's watch - and through my engineering efforts I've learned a little more about him.

He's sailed with this chief mate before on the Moku Pahu (the ship that broke me) as the chief steward.  He has always said his catch-phrase, apparently- it's not a new thing in a string of things that comes and goes... he has always punctuated his sentences with "Hooters!"

As a chief steward he managed to serve stuffed pasta so often that the captain required him to get his menu ok'd every night before preparing for the next day.  When asked why he wasn't cooking steak he said he didn't have any... apparently he didn't know he had to pull the meat out of the freezer and cut it into steaks so he believed that he didn't have any.

He didn't know how to cook actual meat.

If it came in a box or a can, he served it; if it didn't, it was as if it simply didn't exist.  Day in and day out, meal after meal. Week after week. Month after month.

And no, surprisingly enough, he wasn't fired.

Posted by A Merchant Mariner at 9:06 AM No comments: