Wind Across The Bow Bulb

So I’ve managed to let about six voyages go by without posting an account of my days, photos notwithstanding. I should feel guilty, or slovenly, but I don’t… when you’re trapped in a time warp, moving at relativistic speeds, six days feels pretty much the same as six voyages- the rest of the world moves on through accelerated time while seemingly mere days have passed within a ship-board warp bubble.


So oceans are not enough- I travel through time and space, too.


Last time through Yoko there was an elephant on the dock, the main diesel generator went out, and a human body drifted in and settled off the aft mooring deck. The elephant turned out to be stuffed and quite dead, the generator blew up and was quite dead, and the human remains were… well… a bit gruesome. The Japanese professionals recovered the body in an almost SWAT-style operation involving six rescue trucks, multiple aid cars, and an army of divers, police, photographers, coroners, etc...


One day south of that strange Port of Yokohama stay, I saw a pod of orcas. Their massive dorsals are unique in the blackfish family, and they can’t be mistaken for their larger cousins - the pilot whale - no matter how creative the imagination. Clearly they don’t know about the Japanese.


We all stared in amazement, but of course, there was the one naysayer who swore up and down they were pilot whales. He is Polish, and the Filipinos and Hawaiians refer to him merely as “the Polack.” Or “that goddamned Polack,” as the situation may warrant.


A young Hawaiian asked me, “Is ‘polack’ a derogatory term?”


I had to break it to him that in this case, sadly, it is.


The orcas were harbingers of hardship, unfortunately: after seeing them, we began to roll like mad, at one point hitting 30-35 degrees, flinging detritus throughout the ship. Securing lines were parted, buckets and bottles and brooms and whatnot went everywhere, and everything I own worked its way to the deck, where it circulated as if in a gyre. Nobody slept. Many were sick.


The seas were only 10-12 meters, but in this little ship when she has a high “metacentric height,” or righting moment due to a light load, and we get in the trough or the swell is on our quarter, we snap roll like whiplash.


It didn’t let up until we were behind the breakwater in Guam.


The c/m, same guy I spent three months with last year as bosun, decided we should lower the lifeboat there behind the breakwater instead of Yokohama, opting to sit in the sun in 95 degree heat and liquid humidity instead of the reasonable 65 degree Japanese springtime. Sure enough, the davit hydraulics failed and I was forced to sit in the full sun, out in the fast rescue boat, roasting in my own juices for 4.5 hours as the rest of the gang pulled the partially deployed lifeboat back aboard with chain hoists.


Why was I surprised? Because the voyage before, on the previous rotation through Guam, he had us do the exact same thing- so he knew the hydraulics were screwed. He knew, and he did it again anyway, as if they’d have fixed themselves in the two weeks since the last time we hauled the boat back up with chain hoists.


We left Saipan running before a typhoon. We headed due west though the Philippine Sea for three days before turning north toward the Sea of Japan. The typhoon was stalled, fortunately, and we were able to get around it, but I agreed with the captains on several other ships in the fleet that stayed put an extra day and didn’t take the chance on which direction the storm was going to break.


And now I am on my last run. I am short timing it- angry, tired, as unapproachable as a wet cat, and only here due to the fact that there are physical limitations to the power of wanting to be somewhere else. 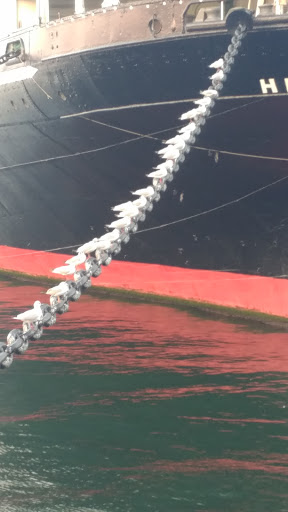 Posted by A Merchant Mariner at 3:47 AM 2 comments: