As I have said, this is a small ship.  The ocean is big.  And seas that I have grown used to consider as “inconsequential” aboard the 1000 footers will straightaway put her lithe and narrow hull into a 15 degree roll.

There is another motion on this ship, while we be rollin, that I haven’t encountered on any other vessel; I can only liken it to somebody shaking me awake, since it only happens when I am in a deep, fitful sleep.  This morning it happened at about 0430, and continued until about 0700, holding me hostage from REM sleep.  At 0530 it jostled the latch on my head door loose, which promptly slammed hard enough to knock all the clothing hanging on that bulkhead’s hooks to the deck.

And yet my carefully balanced bottle of Dr. Bronner’s Soap remained perched on the smooth, slick metal of the shower valves, unmoved.  In a word, it is inexplicable.


This is really my first North-South run, and not crossing a time zone a day is a wonderful thing.  To sail without that headache is to remove one of the rocks from my shoe as I walk across the globe from one container port to the next identical container port.  We do cross one zone (from Tokyo to Guam), but this old man advances in the day, so that the net result to the crew is a 7 hour work-day, as opposed to being robbed of an hour of sleep.  On the way back we retard at night, so we get an extra hour of sleep.

And while it was in the 20’s in Pusan when we left her shore, and in the 30’s in Yokohama when we left that city, it only takes 5 days to get to Guam.

Guam’s heat is ferocious even in winter… the humidity is such that stepping out on deck on a cloudless day is like stepping into the shower.  I was very glad for the time to adjust in Hawaii, though Honolulu is about 15 degrees cooler this time of year than Guam. 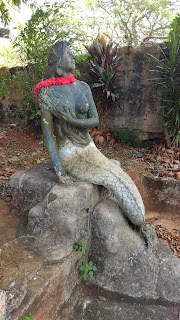 To hire a Guamanian taxi is to be legally robbed by a licensed agency… I am not sure if it is because we are a captive client without other options, or if Guam despises its American overlords and it’s merely a way of showing spite, but each direction to town (a 10 - 15 minute drive) is $50.  Each way.

So my organic yogurt, kombucha, maple syrup, and hydrogen peroxide set me back a pretty penny.

Saipan is 12 hours north, much smaller, and about 10 degrees cooler than Guam.  We had the latter half of the day to hit the beach, but by the time we finished taking on stores a heavy rain moved in and parked over the island.  I opted to forego exploring on my first visit, a rare event for me. 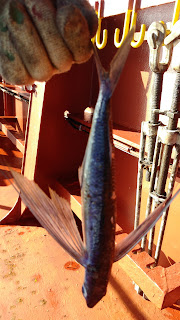 And then we steamed back north.  Back to Pusan and back to the cold.  And then South again, back to Yokohama.  1 ½ trips in and I am already acutely aware of early-onset Groundhog Day syndrome.

So here I sit, New Years Eve, tying a bell rope and listening to an audiobook at the early hour of 2100.  We sail at 0400, and many of the younger, hardier, and foolhardy aboard will be living it up in Tokyo, a short bullet-train ride away, and getting back to the ship an hour before sailing with a stagger to their swagger.

Not this one- a melatonin is dissolving under my tongue as I type.

I recall last year:  January 1, 2017, New Year’s morning, in between Sri Lanka and the Malacca Straits (in the Bengal Sea), waking up at 0030 and racing into my small head to spend the next 8 hours in a tiled room as dengue fever played hell with every inch of my internal plumbing.

The tension headache.  My bleeding gums.  The rash.  The loss of overtime pay that day.  2017 started nauseatingly crappy- 2018 can damned well start well-rested and serene.

Posted by A Merchant Mariner at 5:01 AM 2 comments:

An Island of Misfit Toys

I didn’t sleep well the night before my flight.

It was 12 hours from Honolulu to Incheon; then, another 2 hours to Busan, where an agent picked me and 5 other sailors up and drove us to a hotel, about 20 minutes away, where I finally got a solid 6 hours of sleep.  The shuttle was back at the hotel at 0700.  The ride to the ship took over an hour.

She is small - 500 feet.  The gangway is only about 30 feet, end to end.  As with all ships we in the neglected US Merchant Marines inherit, she was an old foreign-flagged and abused nag, tired long before we got her… it seems I’m always fixing ships before they are reflagged back out of the fleet or scrapped, altogether.

10 stories from tank top to bridge deck, she has no elevators and the ladder is only wide enough for one man.  The freeboard is so low that we’ll be restricted to the house in seas I’d otherwise ignore.  There are no tunnels fore and aft.  My quarters are positively tiny.

The Sea of Japan is usually a boring affair on the 1000-footers I’ve gotten used to, but we rolled our way along our first night out as if we were on the open ocean with weather… which is probably why the old man warned me when I signed articles that if I mind a bit of a roll that I’d be uncomfortable.

I feel eternally grateful I find the motion of a ship lulling and comforting, or else I’d truly be a miserable bastard at sea, what with the bland food, the poor excuse for company, and the asinine hours.  The view, however, is the finest a man could ever hope for.

The gang, for the most part, is OK, but they’re standoffish in a wholly familiar way... I am, yet again, the only white guy in the unlicensed deck department- a division of labor I find perpetually fascinating.  When my seatime permits me to advance to third mate, I will be yet one more statistical data point that says: “White Man In Charge.”

To say otherwise would be blindness.  The unlicensed gang in the US fleet is more and more Asian, less and less white.  We jokingly say “no rice, no work,” and all of us together (all skin tones) find the joke amusing, but it’s interesting to see it happening just as I watched construction turn more and more Mexican during the last decade.

Unlike my last two ships, there are no women aboard this one.  The old man is a surfer who spends as much time ashore in Saipan and Guam as schedule permits (and he influences much of the schedule), the engine department is full of gun-nutz, and the steward is 130 lbs of tall tales and a lifetime of frustration; anyone who understands human nature would fear the steward more than the gun-nutz in the black gang.

It is an island unto itself - an “Island Of Misfit Toys,” if you will.  And I will be here for another 118 days.

After all- it’s a marathon, not a sprint.

So here we go.

I picked up a 120 day job as a dayman on a shuttle loop that runs between Guam, Saipan, Yokohama, and Pusan (now more commonly spelled Busan). Apparently the run takes two weeks, so I’ll do it 8 or 9 times before my contract is fulfilled… I suspect that sense of Groundhog Day (all over again) will be fairly intense by the end of it all.

Bad news?  None, yet. This won’t become apparent until I get there, sadly...

Good news?  Everyone seems to have good things to say about the crew and the run- including about the ship, which is a teeny, tiny, itsy, bitsy, 500’... which will certainly take some getting used to.

In two days I fly to Korea, where I’ll sign my Articles. A sailor I know that was on there recently said there’s a “great health food store” in Saipan, which underscores that we’ve sailed together, but calls into question his definition of “great,” and “health food store;” I won’t get my hopes too high…

I just completed two days of standby work on an old 1973 steamship as the standby bosun- our job? Taking every single firehose on the ship and linking them together into one long hose and charging the system for ABS inspectors.

Bad hoses are cut in half there on the spot, and replacements have to be aboard before the inspector will sign off on the test.  There were about 120 hoses total… 60 of them we carried up through the maze of the fiddly (smoke stack) from the engine room to the top of the RO RO car deck - that’s about 12 stories of engine room heated stairs to the full Hawaiian sun- and the rest were laid out on either weather deck.

The photo Laura sent of my truck covered in Seattle ice clashed mightily with my Getting-Used-To-The-Tropics-Again reality.  It will prepare me for Guam and Saipan, while Japan and Korea will rely on my Seattle training. And warm clothes. Which I brought, not because I thought I’d need cold weather clothing, but for surviving the ship’s air conditioning, which is either on Full-Arctic, or not working at all.

And that’s the news from the the Honolulu Sailors’ Home, aka the Doghouse.