Posted by A Merchant Mariner at 12:44 AM No comments:

Ready in The Trenches

The Indian Ocean was blanketed by thick stratus clouds and fast moving showers, high winds and whitecaps, and seas that gave us a slow roll with quick slapping side-to-side modulations during our run around the point of Sri Lanka.  I worked overtime every evening and I would have worked it every morning, too, but my total hours were too high for the budget and they wouldn’t turn me to.

During the six day transit from Singapore to Karachi my completed work list (in no particular order) looks like this:  Painting every fire hydrant on the ship.  Chipping and painting the forward emergency life raft embarkation stations.  Chipping and painting the after winches.  Coordinating with the 1st Assistant Engineer to fabricate parts necessary for me to repair two of the after winches’ engaging arms, and actually replacing those parts.  Replacing all 150 meters of 80 mm 12 strand polyolefin mooring line on the after winch.  Cutting the new 250 meter, 72 mm, 8 strand polyolefin line in half and splicing in eyes to make new tug lines (used in Pakistan).  Replacing lines on the forward rat guards.  Cleaning and greasing every turnbuckle on the lashing gear used to secure the containers to the ship.  Making new taglines for the new tug lines.  Removing the old 80 mm nylon (bad!) mooring line by cutting it into pieces and lugging it up to the “dumpsters.”  Making curves stencils to repaint the name and flagged port on the forward life rings.  Sorting through the grease buckets, drums, and miscellaneous greasing implements to remove unknown/ unmarked chemicals and consolidate the petrosnots that are used by the deck department.  Replacing the door lock cylinder on a crew member’s quarters door. Painting repurposed first aid boxes to house my door parts.  Taking all the saved tin cans from the galley and making wire lanyards to use for paint pots.  Discarding all the buckets I’ve hoarded in the paint locker since coming aboard (Laura knows I’m a bucket hoarder- it’s a sickness).  Cleaning the former dumping grounds for the deck department, the forecastle (“Bosun’s Stores” on the ship drawings) and turning it into a proper line locker/ cargo gear stowage.  Repairing the two antennae blown off in the Indian Ocean monsoons.  And lastly, port prep, port side-to, for a 1000 arrival into Karachi.

Our first day into port I began the long anticipated starboard weather deck restoration.  It has deteriorated so much as to be embarrassing, so my daymen and I attacked it first thing with needle guns, three-fingers, and lawn mowers (all of which are specialized tools for making hellacious noise and stripping steel to bare metal).  Halfway through the day I got called to remove two fan motors from different cargo holds.

I did not know it when it was requested, but the person responsible for the motors (the reefer) said they’d need a crane.  The mate asked me to look at it, and after inspecting the larger of the two I said “sure, I’ll snatch that out for you,” and I assembled a block and tackle arrangement (gun tackle rove to advantage, to be exact) with steel blocks and 3 inch Manila line and then slung it all from an upper lashing bridge adjacent to the hold.

I figured something was up when the Chief Engineer and 1st Assistant Engineer came out and joined the Mate (with cameras) across the open cargo hold from our hoist to watch the evolution.  I suspect the Old Man was watching from the bridge, too (there are photos from the bridge on the ship’s computer).

When the last container was lifted out of the hold and into the sky from where I set up, we dropped the hook down and the reefer rigged the motor up.  It was pretty salty, actually- the smell of manila line as my Filipino daymen and myself counted out a cadence and “snatched” it out of there, hand over hand.

It wasn’t a straight lift, of course- the arrangement went sideways and through a lightening hole and the reefer tried with some success to control the 500 pound mass of tightly wound copper armature, but within 5 minutes it was liberated from the hold and manhandled onto the lashing bridge as I momentarily thwarted the very Force Of Gravity, itself- and Gravity is nothing, if not persistent.

I still don’t know exactly why it got so much attention from the officers, but I think: 1) It has been rotting down in that cargo hold awhile, a thorn in everyone's’ side- Deck and Engine Departments alike, 2) There hasn’t been a Bosun on here with the experience to take it on, and 3) The company really didn’t want to hire a crane to hoist it out.

I think my cache went up with that one, but for the life of me, I can’t see what the big deal was- I’ve always had to move unwieldy things to and from impossible places.  I think about flipping boat hulls over with Fleetwood, for example: It was never a question of whether or not we could do it, but how, and how fast did we need to run (very, it turned out).

Anyway, I am nearing the end of my 2nd voyage (less than two weeks) and at that point a new Chief Mate comes on.  His reputation is not so hot, so I am laying the groundwork for a protracted battle of wills and an endurance run of endless confrontation even as I hope for the best.

My buddy- and the first Bosun from my first posts on this here blog- had a way of running mates off the deck so he could have some peace and quiet during his work day:  Every time he saw the Mate on deck he pointed out a safety item that involved hot work (welding).  Because it is safety it cannot be ignored.  Because it is hot work it involves, at minimum, 3 men- one welder, one fire-watch on deck, and another fire-watch below the plate being welded.  Because it is so involved, it requires input from the port engineer, requisitions from the ship’s agent, and a final inspection by ABS (American Bureau of Shipping) or the USCG.

After three or four such encounters on deck the Mate would turn and run the other way when he saw the Bosun on deck.

I am mapping the ship, from stem to stern- as I said, laying the groundwork.  But hoping to be pleasantly surprised.  But not expecting to be.

The days have begun to blend together.  The first half of each voyage on the shuttle run I’m on is port after port in rapid succession- Singapore to Singapore with 5 Chinese ports in between.  The second half begins after the 5 hour transit from the second stop in Singapore to Indonesia - the long run across the Indian Ocean to Pakistan.

The emerald green and olive drab of the Yellow Sea this transit have turned to obsidian as the chaotic skies of alto, stratus, and cumulus clouds pile up until the stratus layer gains dominance by attrition and obliterates any trace of blue that once painted the dome of the sky.  If this were Seattle it would be cold.  It is not cold.

My clothing gets soaked in the monsoon rains as I turn- a cog in the machine of this ship.  We are enslaved to a clock and we make her run in spite of the weather and the natural order of things.  My boots are wet.  My clothing is wet.  My dirty laundry would mildew if I left it too long unattended. The decks are awash and the greatest feeling is being dry after a hot shower at the end of the day.

The junior engineer walked off in Singapore.  Apparently, the First Engineer had to work on the frequently clogged sewer system which requires, after much revolting work, the flushing of every toilet on the ship.  The Junior’s room was trashed- beer cans everywhere.  I saw the photo the Engineer took- it was pretty heinous.

It is illegal in America for 20 year-olds to buy and drink beer.  When the Captain did a “surprise sanitary inspection” of the ship he pointed this out to the junior.  The junior claimed he was in “international waters,” which pissed the old man off.

Just for clarification: The junior was on US soil while aboard this US flagged vessel, and he did the equivalent of arguing with a judge while on trial under the jurisdiction of that very same judge when he took on the old man.  Clearly, being 20 makes a man-cub cockier than he has any right to be, but this wouldn’t be cockiness for the sake of cockiness… this would be plain old stupid.

So he “quit” and probably found himself on the company’s Do-Not-Hire list, to boot.

Right now we are slow-belling through Indonesian waters towards our next port… I’m not certain, but we probably have a pilot boarding time and the speed required has us turning somewhere between 50 and 60 RPMs (I can feel about a turn a second).

I went to sleep at 1600 but woke at 2315 from hunger.  We’re supposed to arrive at 0200 so I want to be rested, but not too rested- I might be too rested.  After arrival I’ll want to go back to sleep… thank god for melatonin!  Laura just shipped me more- I should get it next time we go through Singapore.

I have deduced that the single greatest determination of my attitude is sleep.  I can cope with anything, unflinchingly and with my humor intact, if I’ve had a full night sleep; denied of sleep I become negative, angry, and unnecessarily confrontational.  I find it amazing it has taken me to middle age to figure this simple thing out.

And that’s all I got.  No mermaids were sighted.  No whales.  No waterspouts.  But I did see some stunning lightning over Singapore while I did crane ops in the torrential rain this morning, and if that’s what I get then that’s what I’ll take.  And I’ll like it.

Posted by A Merchant Mariner at 9:06 AM No comments:

Chinese Coaster (And My Future Boat) 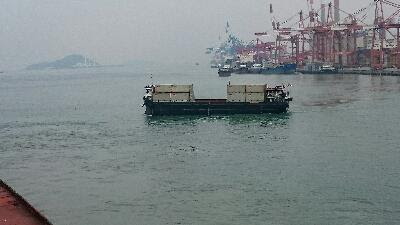 Posted by A Merchant Mariner at 5:52 AM No comments: