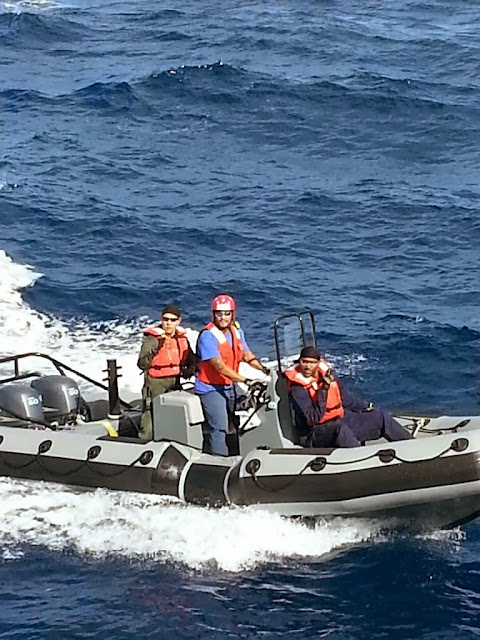 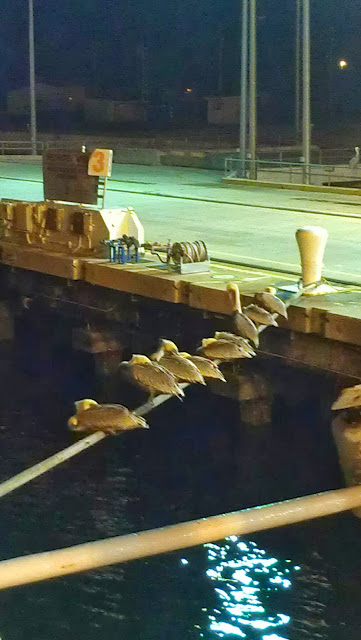 Posted by A Merchant Mariner at 5:27 AM No comments:

So I figured it out… it was a red-footed booby, not a juvenile northern gannet that spent two days zigging and zagging in front of the foremast on her hunt for flying fish.  How did I finally make this conclusive determination, you ask?  The red feet.  Elementary, really.

My bird tally so far this run is an olivaceous cormorant, two red-footed boobies, some unknown little sparrow-like song bird, and today- contrary to all expectations- a stork.  Like every cartoon you’ve ever seen, a stork is an unmistakable bird: long legs that hang awkwardly down and aft, a long neck tucked into a tight s-shaped hunch held tight against the body, and a bill of pelicanescent proportions.  What the hell a goofy, gangling, shore-bird is doing struggling against the ocean winds out here is beyond me.

Great stars… our course taking us between a sky dominated by Canis Major, Orion, and Taurus to that of Ursa Major, Minor, and Cassiopeia…. with Perseus tucked between at the interstice of these two skies getting lots of face time.  It’s been clear enough that Andromeda’s galaxies stand out quite visibly, the salty air kicked up by 25 knot winds and cats paws notwithstanding.  During my stint on the APL President Polk, Jupiter was crossing the rat-like face of the bull… now, however, it has migrated all the way down to Gemini, south of Taurus in the sphere of the sky… if I project forward another year then Jupiter will be in Cancer this time next year- pointless trivia for most, but when I sit for my 3rd mates unlimited next year I will be using it to shoot a nightly asthmus, so it isn’t trivial to me...

My first glimpse of the sea at noon’s watch presented me with a flock of flying fish exploding off the port bow like bird-shot from a blunderbuss.  They flew a hundred meters or so, and cued by some unknown signal, all dove into a swell as one… but the cormorant and the booby were nowhere in sight.  I spent the rest of the watch making coffee for people visiting the bridge and blabbing about nothing so if there was anything else noteworthy to see, I didn't see it.


And there you have it.  My watch is done.  This is written.  I am showered and shaved.  Lights out for this intrepid sailor.
Posted by A Merchant Mariner at 2:45 PM 3 comments:

The wind picked up last night and with it has come 2 - 3 meter swells.  We're safely inside a high pressure system that is keeping the low pressure cold and snow over most of the N. American continent at bay, but the barometer continues to drop, so... the nasty might be on the way, even out here in the warm Atlantic current north of the Bahamas.  I don't care- the more it builds the better I sleep.

I've seen plenty of flying fish the past few days, too.  An olivaceous cormorant visited yesterday, and today we played host to what might have been either a juvenile northern gannet or a red footed booby, who flew back and forth off the bow at the height of the foremast on the hunt for flying fish, upon sight of which, the bird would swoop down and chase the fish across the wave tops at great speed.  Also, inexplicably, the bird puked in an exaggerated and comical fashion while in mid flight... a thing I don't think I've ever imagined but now know was clearly absent from my ocean-going experience.

OK.  The 12x4 watch has me exhausted and bedtime is overdue.  My book, "Seabirds of The World," by Peter Harrison, is a total win.
Posted by A Merchant Mariner at 1:39 PM 1 comment: 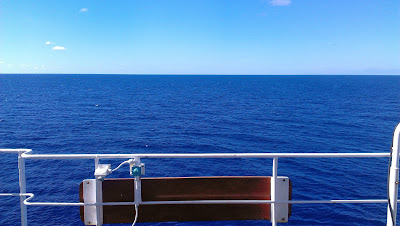 Posted by A Merchant Mariner at 1:16 PM No comments: 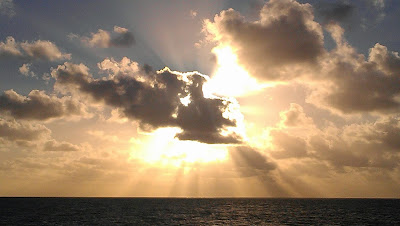 Posted by A Merchant Mariner at 1:15 PM No comments:

Sunset Over The Atlantic

The ocean was a brilliant indigo, today, with light cumulous clouds that never seemed to get in between me and the sun.  No wildlife to speak of but for a lone black seabird with a long, loon-like neck (of course my seabird identification book is in my quarter and I am up on deck 03- so now my failure to identify before blogging is merely an indication of my shameful laziness).

It feels like a great change to be on sea watches, doing sailorly things, after so much time at the dock and in the boatyard.  A light swell on our port bow makes for a pleasant and smooth pitch that lulls me to a nodding sleepiness, a sirens call that is hard to ignore after yesterday's 18 hour day.

Posted by A Merchant Mariner at 3:30 PM No comments:

I Drive a Ship, Bitches.

And this is where I do it. 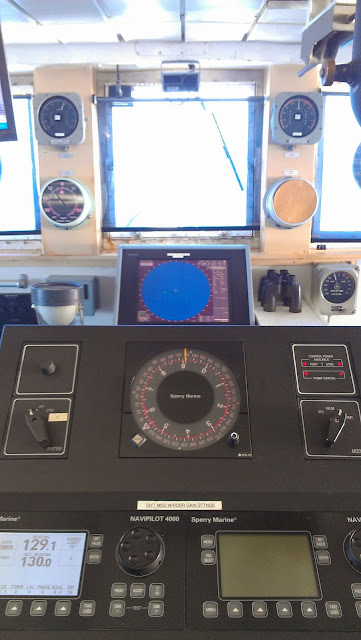 Posted by A Merchant Mariner at 3:29 PM No comments: